Lady Volcano  aka Sonia Asmahan is a professional artist, a singer/songwriter and a dancer . She uses all this afore mention in entertaining her fans and audience.

She was a dance pioneer and became a successful belly dancer in Egypt. The artist is also a music producer and the creator of Iso Style, a new dance learning method. Lady Volcano has her own label, a small music publishing company and for live performances she performs solo or with the rock band project9.

Sonia has a well-known face in the MENA region. She was the first German to get a leading role in an Egyptian TV series, which has been broadcast regularly for half a billion people for years. The artist was the first German belly dancer to perform in front of 10,000 spectators in Carthage, the oldest amphitheatre in the world. Sonia also was the first German to found and run an international dance centre in Egypt and was the first German artist to write and perform two Arabic dance theatres in Germany. The artist manages her own musical works and administers the licences. Her music is life-affirming and explosive – like herself. She loves martial arts and has a 2nd Dan in Taekwondo.

She is a self accepting, imaginative, charismatic and charitable person, with a noble heart, who loves to travel and surround herself with precious metals. She loves people who can rise like a phoenix from the ashes and rekindle their fire. She fights for injustice to be lifted and balance to be restored. Her inner attitude is the will to survive, overcoming fate, perseverance, self-assertion, triumph and the attainment of justice. She is peace-loving, inventive and gifted.

Her artistic life as a dancer.

On a journey to the Orient Sonia fell in love with oriental dance. Thereafter, she followed the call of adventure and set off with her backpack to become an oriental dancer in Egypt. For many years the German danced successfully at the Red Sea and ran an oriental dance school there for 7 years. Sonia was not only successful as an oriental dancer, but also beyond the borders of Egypt. Her film role as „Rasha Lotfi Damanhouri“, the film daughter of Gamil Ratib in the Egyptian TV series „Sonbol“ with Mohamed Sobhi, made her famous throughout the Arab world. Almost every Egyptian has seen her face with the red beret on TV.

After the series, the artist remained true to dance and danced with her own music and folklore group in various hotels at the Red Sea. The highlight of her dancing career was in Tunisia, when she danced in front of more than 10,000 spectators in Carthage, the oldest amphitheater in the world. The dance pioneer has trained many dancers since then, and today ranks among the masters in the art of oriental dance. After her return to Germany she organized oriental events and dance workshops. Sonia Asmahan also has been making an important contribution to the intercultural dialogue between German and Arabian culture for years. The artist has also a long-standing relationship with Egypt and travels there regularly. Sponsored by the city of Stuttgart, the artist staged in Germany two self-written dance theaters in Arabic language. Since the refugee crisis, the artist is intensively supporting integration projects in the Federal Republic of Germany to integrate Arab refugees and immigrants.

How she became a singer/songwriter?

At the opening of the Tut Anch Amun exhibition in the Old Castle in Stuttgart she danced and was approached by a volcanologist who enthusiastically compared her to a volcano. This inspired her so much that she wrote her first rock song „She’s a lady volcano“. 2012 she released her first  music album „Lady Volcano“ , founded a band and a music publishing house.„Lady Volcano“ was born.

In 2014 she released the single „We wave our flags“ and in 2018  „Falcon’s Dream“ a progressive rock music album with oriental music influences.  Her self-written album deals with having to escape and the stony path a refugee is faced with, full of difficulties and fears. Lady Volcano is right now working on an Arabic version.

In 2019 she released her third album “Riding Fever”, with story-telling songs about her experiences on bike events, with freedom-loving bikers and the passion of riding a motorcycle.

Together with Uli Lindner „U9“ she founded „The project9“ in 2019. At the 15th of november 2019 she performed  with them live on stage at the Strandbar 51 in Winterbach / Germany

During the Corona crisis 2020 the artist wrote and released the song „Whatever it takes“. The song is dedicated to all those who stand by their fellow human beings in this crisis. The music was composed by Roman Voronenko.

In September 2020 she released her 4th music album „Fire Skull“ with 12 songs dedicated to women. The artist sings about the mental development processes a woman has to go through during her life. For some of her songs she was inspired by the book “Woman who runs with the wolves” by Clarissa Pinkola Estés. The American writer and psychoanalyst says that a woman can only be strong, healthy, creative and happy, if she can find the roots of her instinctive nature – the “Fire Skull”.

In March 2021, she applied for the international word and figurative mark „Iso Style“ at the German Patent Office. The artist has developed and produced a dance concept to bring her dance style to a wider audience online. Iso Style is a dance method that combines western and eastern cultural codes.

On April 4, 2021, the day of death of Dr. Carl Benz, she has released the French music video „Benz Benz“ by Lady Volcano & Spellfire Jamal. Produced by Roman Voronenko

We wave our flags

Whatever it takes - Single 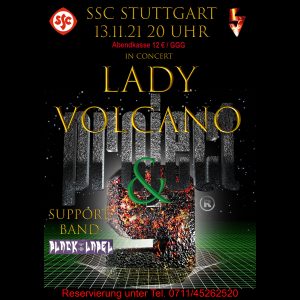 Cancelled because of the Corona Warning level.

The name comes from Hip Isolation. ISO STYLE is a dance from the hip, a fusion of oriental dance and street dance. From this a young and intercultural dance style has emerged. For the artist Sonia Asmahan aka Lady Volcano, who created and developed the dance method, it is the dance of the 21st century.  She says, „It is healthy, easy to learn and very attractive, because of its inner-body nature. Therefore, ISO STYLE offers a quick sense of achievement because it is relatively easy to learn. The movements are back-friendly, healthy and aesthetic.“ A first dance tutorial will be released in October 2021.

On the anniversary of the death of Dr. Carl Benz on 4th of April 2021 we will publish the video clip to “ Benz Benz“. The idea for the song came from the astonishment of Lady Volcano that Harley riders can also be enthusiastic about a Mercedes-Benz. The Frenchman Michel Dagois combined his visit to Stuttgart with the purchase of a 6 cylinder „Benz“ SLK. He wrote the song lyrics to „Benz Benz“. In cooperation with the  artists from Stuttgart Spellfire Jamal and Roman Voronenko, she produced the song and released it in September 2020 in her album „Fire Skull“.

Thanks to Winfried Seidel of the Carl Benz Automuseum, the video was shot last summer in the birthplace of the 1st car 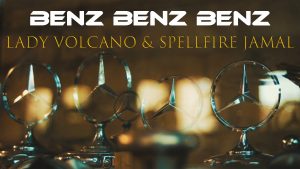 Release – „Fire Skull“ is the 4th album of Lady Volcano which is dedicated to women. The new album therefore includes not only rocky, but also danceable funky songs. The artist sings about the mental processes a woman has to go through during her life. For some of her songs she was inspired by the book “Woman who run with the wolves” by Clarissa Pinkola Estés. The American writer and psychoanalyst says that a woman can only be strong, healthy, creative and happy if she can find the roots of her instinctive nature – the “Fire Skull”. 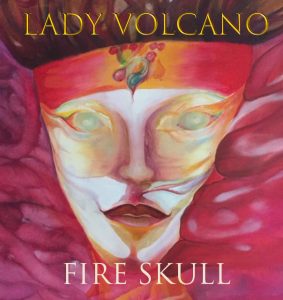 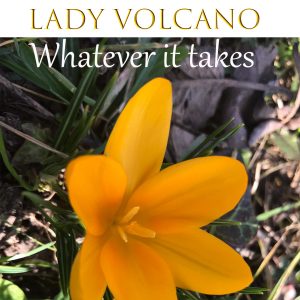 The world changes rapidly. We are living in a difficult time at the moment. The corona pandemic has fundamentally changed the way we deal with each other. Many suffer from the quarantine regulations, the double burden and are afraid of existence. Many see their fundamental rights curtailed and oppose the restrictions imposed by governments on their personal freedom. However, we all have in common that we are looking for solutions to solve the problems. It is now particularly important and necessary to have understanding and still to express opinions constructively.

The Corona crisis shows us how vulnerable we are. We need each other especially in crises. So even if we keep distance, we can feel what’s going on between us. So let’s have more empathy for each other. Let’s express gratitude and encourage each other: „We will do whatever it takes and go through it. We will go on and not give up“.

The song „Whatever it takes“ not only contains this message, it is also a thank you to all those who stand by their fellow human beings in this crisis. The wonderful music was composed by the pianist Roman Voronenko.

CANCELLED 23.5.20  Lady Volcano & The project9  at the Schlagzeugmuseum, Ludwigsburg

We are the supporting the great band Nudi tra i Musicanti 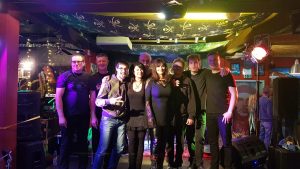 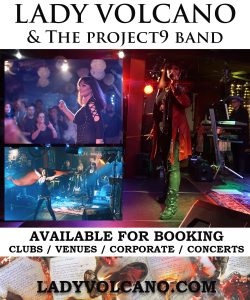