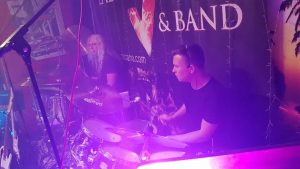 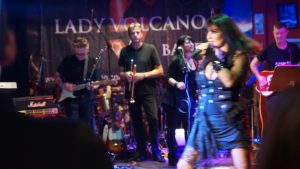 On Friday, November 15, 2019, Lady Volcano aka Sonia Asmahan hosted a release party in the beautiful ambience of the „Strandbar 51“ in Winterbach / Germany. Approximately 150 guests came to the concert.

The location is set up as a pirate bar and also serves as a meeting place for bikers from the area. At the entrance of the Strandbar 51 a fire was burning to get the guests into the mood for a fiery evening.

The line-up could be seen: co-organizer Uneun on drums, pianist and composer Roman Voronenko on keyboard, Chris Westerhove on guitar, Rudi Schürrle on bass, Melanie Wohlfahrt on didgeridoo and as back-vocalist, David Sattler on drums and Thomas Alb on the trumpet formed the musical accompaniment of Lady Volcano.

For the stage show additional stage parts were set up for the singer and dancer. After a prelude with a red veil swirl, she presented a colorful mixture of her repertoire of self-written songs. The artist has released 3 albums and in 2020 the next album „Fire Skull“ follows. Thus, the audience got not only songs from the 2018 and 2019 brought out albums „Falcon’s Dream“ and „Riding Fever“ to hear, but also some unreleased songs that invited to dance. Afterwards all guests could serve themselves at the After Show buffet with Syrian delicacies. The Arabic-speaking artist was belly dancing in Egypt for 7 years and directed there her own dance school. Through her role in the famous TV series „Sonbol“ she is well-known in the entire MENA region.


„The Friday night still sounds pleasant, it was just great!“

„Lady Volcano and her musicians, the ambience of the  Strandbar … totally beautiful and special! Thank you very much for this great concert!“

„Good songs, good lyrics, awesome costumes and the band is also really great! You could also inspire a hall with a few thousand people!“

„Exceptional intro, the songs and the ambience have brought us back to our youth“

„It was great „I have to say, great and great again.“