In 2019 Lady Volcano released her rock music album „Riding Fever“ which she has dedicated to the biker community and Harley-Davidson motorcycle enthusiasts! Read here why she wrote a music album for bikers: 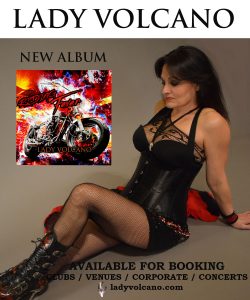 „You find motorcycling attractive? Then you share this passion with me. How did I get to write an album for bikers? When I was a teenager I was friends with bikers and we used to ride motorcycles. Then I left Germany as a backpack traveler to become a belly dancer in Egypt. In Cairo I  had my first encounter with a Harley rider.  Michel came to Cairo from Paris to find old Harleys in Egypt to buy and ship them to France. Mimi „The King“ was the one who later wrote the song „La Bande du Chopper Noir“ for the album. The song tells about the „Black Chopper Band“ in Paris in 1975.

On my first trip to the U.S., I everywhere could listen to the characteristic sound of a Harley-Davidson on the streets. I was so excited that I wrote the song „It’s music to my ears“. I went again to the States to spent time with bikers at the „Daytona Bike Week“ and wrote down my experiences in songs. More songs like „You’ve got the lingo“, „Chopper Dave“, „I carry an eagle on my heart“ and „Let’s go for a ride“ followed. Thanks to all the bikers, who supported me to produce this music.“

Book Lady Volcano & The project9 Band“ for your next event!!